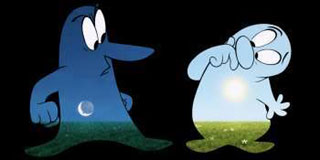 You left CalArts before graduating and went to work for Disney, right?

Yeah. That´s right. I met with Eric Goldberg and Mike Gabriel who were directing Pocohontas and they hired me. Unfortunately my style just didn´t acclimate with that movie. So I bounced around Disney for a year and a half until they bounced me right out, basically [laughs]. They really couldn´t find a place for me. It was weird. There was something they had liked about me, but they couldn´t figure out how to fit it in to what they were doing.

I know you were reluctant to pitch Day & Night after so many previous rejections. Do you feel that your sensibilities don´t always fit into the direction of Pixar and the kind of films that are trying to make?

Yeah. It´s strange. Of course I´ve worked here for ten years, so there´s a part of what I do that fits in with their style. I almost think it´s like a spice that you don´t put too much in. [laughs]. It´s a very specific thing that I do, especially with my conceptual ideas or storyboards. I think they like to have a little of that flavor, especially Brad, inside of their films. But I felt that they didn´t want a completely raw version of that.  That´s what kind of surprised me about Day & Night because it was so different than what they have normally been doing. It was such a strange concept and it was going to be drawn as well. The way we were even using music and voice over in this oddly, naturalistic way.  All these things were odd and different from a normal cartoon. That kind of blew me away. I´m not kidding; John really went for everything we pitched, it was incredible.

Tell me about the pitch you did for Day & Night.

The pitch itself was in 3D. You had to wear 3D glasses during the pitch. I had the two characters meeting, they fight and I had a sunset. It was nothing more than twelve drawings. I think my attitude was different than previous attitudes I had going in for other pitches. Instead of fleshing out the whole thing. Like I said before, John really likes to build something with you from the ground up. So that´s why I decided not to iron out the whole thing. I´ll have a good concept and a couple of really strong ideas that go with the concept of how it can be utilized. I had to be confident about where this is going to go. I was trying to trust the process more instead of fighting the process. I didn’t even finish the pitch, before John said, “This is it. This is the one we are doing.”